One consequence of the spread of the Covid-19 coronavirus is that everyone is thinking about cutting down on travel and on physical meetings.

It’s no surprise that there’s lots of talk about “working from home”, and attending meetings virtually instead of being in close physical proximity with the other participants.

For the time being, London Futurists will continue to organise physical events. Two are scheduled for the next few days:

Other new events are in the process of being planned.

However, we’ll be monitoring advice from health experts and the government. In case advice is given that such meetings should be cancelled or postponed, we’ll send round messages to everyone involved.

To lessen the chance of unintentional transmission of the virus, we should probably stop shaking hands at these meetings. Let’s figure out alternative ways of giving each other friendly futurist greetings. Perhaps a variant of the Vulcan “live long and prosper” hand salute from Star Trek? 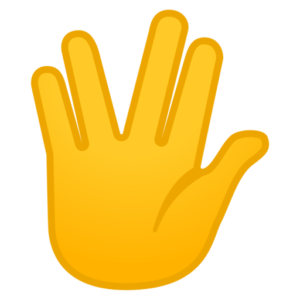 In parallel, London Futurists is planning to experiment with online Zoom replacements for events that we would previously have held as physical meetings. There will be more news on this subject soon.

Two are edited recordings of London Futurists video conversations. The third is a recording of our most recent event at Birkbeck College.

“Discover the uncomfortable truth of what transhumanism means for humanity: from morphological freedom to death as a lifestyle choice.”

Transhumanism argues that we should preserve and extend the unique properties that make us human by radically altering ourselves and the environment around us. Recently transhumanist thinking has seen a resurgence thanks to new technological developments that point towards the possibility that many of its promises will be realised. This raises a number of challenging issues that aspiring transhumanists must soon face: from how they will choose to manipulate or upgrade their body; to how they will approach the taboo of death – especially if, in principle, you could live forever.

(A quick side note: these questions aren’t new for transhumanists. The transhumanist community has been thinking about these very issues for at least thirty years. See H+Pedia for coverage.)

The speakers will be sociology professor Steve Fuller and bioethics researcher Francesca Minerva. They’re both live wires, so I’m expecting a flurry of lightning strikes.

For more details, and to obtain tickets while spaces still remain, click here.

The Singularity University London Chapter have kindly provided London Futurists with a 50% discount code for an event being held in Farringdon, London EC1M, on the evening of Thursday 12th March.

The code is sulondonfuturists and you can enter it if registering via this Eventbrite link.

The event has the title “How AI is affecting strategic decision-making”. Here’s an extract from the meeting description:

We live in a time of accelerated exponential change powered by a series of technologies that are allowing humans to do things that were not possible before.

Artificial Intelligence is at the centre of this change powering many of those exponentially growing technologies. Ray Kurzweil, co-founder of Singularity University, predicts that by 2045 AI will surpass human intelligence. But how much is AI impacting our businesses now?

The speaker will be Roger Spitz, whose details you can read about here. Extract:

Roger brings two decades of investment banking experience advising CEOs, boards, decision makers and shareholders of companies globally. He has established longstanding connections in Silicon Valley, throughout the US, Europe and across the world.

As the former Head of Technology, Media & Telecom (TMT) M&A with BNP Paribas, Roger advised on over 50 transactions globally with overall deal value of $25bn, and which raised $2bn in capital.

For the past five years, photographer David Vintiner and art director Gem Fletcher have been documenting transhumanism in Europe, Russia and the United States based on a curiosity about the movement and its implications for the future of humanity.

This project is now culminating in the publication this summer of a photo book “I want to believe – an exploration of transhumanism”. Here are some details about the book:

For full details of the crowdfunding, and a chance to obtain limited archival prints in 10 x 8″ and/or 15 x 20″, click here.

The project traces its genesis to Gem Fletcher attending London Futurists events in 2014. Several London Futurists regulars are featured in the photographs, including Andrew Vladimirov (pictured).

I’m happy to share the following news about the availability of the film 2030:

FM-2030 was a world-renowned author, and futurist, and is considered the father of transhumanism. He accurately predicted 3D printing, gene therapy, telebanking, and other marvels of modern technology, before his death in 1999. It was his conviction that the future would usher in a “post-human” world where revolutionary technological advances would solve humanity’s most perplexing ills.

Before cancer stole his chance of seeing the world of 2030, FM-2030 turned to science to cryopreserve his brain for a future awakening.

Filmmaker Johnny Boston was only 10 years old when he first met FM, a meeting that evolved into a lifelong friendship. The film “2030” reviews what might happen when Johnny learns, years later, that scientists are going to attempt the world’s first reanimation of a cryopreserved brain – that of his friend FM-2030.

Not quite a biopic or an homage or even a traditional documentary, “2030” is an engaging docu-drama with thriller and sci-fi flourishes that seeks to answer the deeply philosophical question “What will it mean to be human when technology has finally given us a world where no one dies?”

For links to where 2030 can be viewed on platforms such as Amazon Prime, Apple TV, Google Play, and Microsoft Xbox, see here.

7.) If you’re coming to our event at Newspeak House tonight…

Finally a quick reminder to anyone considering coming to our event “Towards a Technoprogressive New Deal” at Newspeak House this evening (Thursday 5th March):

The talk will be starting at 6.30pm. Doors will be open from around 6.10pm, for those who want to be sure of getting a good seat.

No refreshments will be provided, but attendees are welcome to bring their own.

If you’re unsure what will be covered in this event, there’s a preview here.