Videos, events, and one cancellation

I don’t like to cancel London Futurists events. Over the 9+ years we’ve been running, I can’t remember cancelling an event before.

However, the event scheduled on Sat 3rd June, “Agenda for the Future”, is too close to a major national political event that will be taking place a few days later, namely the UK General Election on Thu 8th June.

Many of the intended speakers and audience members will have other things on their minds in the run up to Election Day – other campaigns to organise or meetings to attend.

Reluctantly, I’ve taken the decision to postpone our Agenda for the Future event until some time later in the year. I’m sorry for the inconvenience this will cause.

I’ll be refunding everyone who has already paid for a ticket to attend. Registration will be re-opened in due course, once a date has been confirmed and any changes in the speaker line-up agreed.

2.) The importance of futurist thinking in the run-up to the General Election

Although the event on 3rd June is being cancelled, this doesn’t mean futurist ideas will take a back seat during the run up to the General Election (GE2017). Clear-headed assessment of forthcoming disruptive changes needs to be a central part of the political discussion in the weeks ahead.

Instead of the full day multi-speaker event previously planned for 3rd June, you can expect lots of different kinds of futurist interventions and provocations, spread out over the weeks ahead.

For example, here’s an excerpt of an article “Championing the Future” I wrote yesterday on the Transpolitica blog:

Transpolitica urges serious attention, in the run-up to GE2017, to a number of potential existential issues. We need politicians who will commit to devoting significant energies to developing practical plans to enable the following:

In other words, there’s more to GE2017 than Brexit.

On the other hand, proper solutions to the big issues of the near-future depend upon a healthy international environment. If you think that the UK leaving the EU will significantly impact, for better or for worse, the UK’s ability to address the other big issues, then maybe you might be correct, after all, to prioritise the Brexit issue in the GE2017 campaign.

3.) Who can save Humanity from Superintelligence?

Some of the themes covered above are likely to feature in the London Futurists event happening on 29th April, “Who can save Humanity from Superintelligence”, addressed by Tony Czarnecki, Managing Partner of Sustensis. 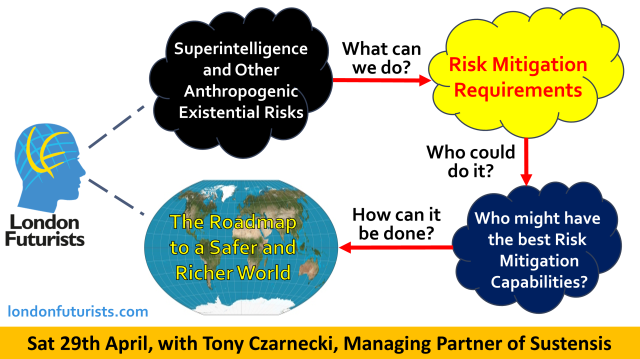 Here’s an extract from the description of that event:

The presentation will cover four overlapping crises Humanity faces today – crises in the domains of politics, economics, society, and existential risk. The presentation will also provide a vision of a possible solution, with a reformed European Union becoming the core of a new supranational organization having the best chance to tackle these problems.

The world faces a series of existential risks. When combined, the chance of one of these risks materializing in just 20 years is at least 5%. We already had one such “near miss” that could have annihilated the entire civilization. That was the Cuban crisis in October 1962, which almost started a global nuclear war…

Additionally, mainly due to the advancement in technology, the world is changing at almost an exponential pace. That means that change, not just in technology but also in political or social domains, which might previously have taken a decade to produce a significant effect, can now happen in just a year or two. No wonder that people, even in the most developed countries, cannot absorb the pace of change that happens simultaneously in so many domains of our lives. That’s why emotions have overtaken reason.

People are voting in various elections and referenda against the status quo, not really knowing what the problem is, even less what could be the solution. Even if some politicians know what the overall, usually unpleasant solutions could be, they are unlikely to share that with their own electorate because they would be deselected in the next election. The vicious circle continues but at an increasingly faster pace…

Anyone wanting to improve the situation faces three problems:

Therefore, anybody that sees the need for the world to take urgent action faces a formidable task of proposing pragmatic, fast and very radical changes in the ways the world is governed.

For more details of this event – and to RSVP to attend what will surely be a lively discussion – click here.

I’m probably biased, but I assess the discussions at the London Futurists meetups so far this year to have been particularly thought-provoking.

Please note that videos of these previous events are accessible from the London Futurists website.

A good starting point is the video of the meetup “Industrial strategy for a sustainable world” addressed by sustainability advocate David Bent on 8th April:

As you’ll see from the online comments on the meetup site, the speaker has kindly made a full copy of his slides available for review.

On Tuesday evening, 25th April, I’ll be taking a London Futurists presentation for the first time to an organisation called Funzing. This will be part of Funzing’s  LDN Talks @ Night series.

This talk is “Can technology abolish aging?” – with the alternative title (on the Funzing site) “Is tech the end of getting old?”.

It’s great to see from our meetup page that over 100 people have indicated they plan to attend. But please note that tickets to take part need to be obtained from the Funzing site. The registration numbers from that route are currently lagging some way behind.

As I said, it’s my first time I’ve dealt with Funzing, so I’m not sure how flexible they’ll be with late registrations, or whether there’s any risk of tickets running out. I therefore recommend people to complete the registration process asap.

The evening event with Funzing will allow a reasonable deep dive into some of the most interesting angles of research into healthy longevity. For a fuller exploration, I recommend a three day conference taking place in Madrid, Spain, from 25-27 Madrid.

The speakers will feature representatives from the highest scientific, legal and political levels in Spain, including the Minister of Health of Spain and the Surgeon of the Royal Family. There will also be many acknowledged experts in longevity and cryopreservation from countries around the world.

Presentations will be in Spanish and English, with simultaneous translation.

The organisers plan to announce some significant advances in longevity extension and rejuvenation, They will also be awarding the Christiaan Barnard Award for Longevity Extension and the James Bedford Award for Cryonics. The conference will also include an update on progress of the forthcoming International Cryonics Society (ICS). 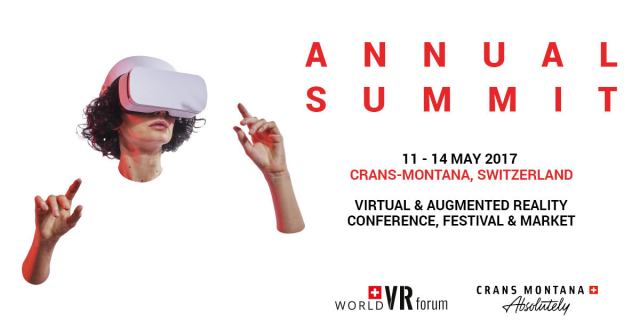 Also in May, WVRF’s Annual Summit is back for its second year as arguably the world’s largest AR+VR conference, festival and market.

I gave a virtual talk there last year – dialling in via Skype – and this year the organisers have asked me to attend physically. I’ll be speaking about the forthcoming convergence of VR and H+ (Transhumanism).

Here’s a short video preview of my #WVRF17 #CransMontana presentation:

Note: the organisers have kindly provided me with a discount code, DavidW-WVRF17, which can be used by members of London Futurists to save 50% off the full pass ticket to WVRF17.