Accelerating a positive future with blockchain? 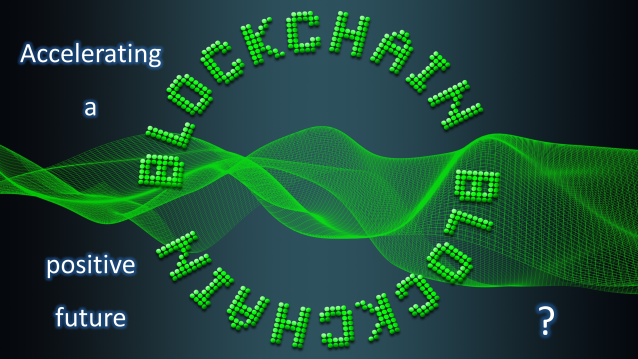 I’ll be taking part in an event in Imperial College on Thursday 26th July. It’s the first event of a newly created meetup, “#TrustlessEcosystems: platforms empowered by AI & blockchain”.

Following some discussions with Laura Degiovanni, the organiser of this new meetup, here’s how I would describe the vision for the group:

Many entrepreneurs and technologists have been attracted by the apparent potential of blockchain to address a wide variety of human problems. Numerous startups have been created, and significant funding has been channelled into blockchain projects around the world.

However – as often happens with disruptive new technology – there have been many disappointments alongside the buzz of excitement. Products have failed to work as expected. User interest has proven shallow. A public backlash is growing against what is perceived to be inflated or inappropriate claims for the potential of blockchain.

Entrepreneurs and technologists who remain convinced of the importance of blockchain therefore face many challenges. In addition to dealing with public confusion about blockchain, careful attention also needs to be given to the changing regulatory environment – including the EU’s GDPR.

This meetup is an opportunity for everyone interested in blockchain to review their experiences and to provide each other with guidance and recommendations. The focus is on collaboration rather than on competing. Rather than each startup trying to secure a perilous foothold in what is currently a relatively small commercial market, the goal is for members to identify and take actions to expand that market – in which case, there will be more opportunities for everyone to pursue.

The events will feature product pitches and facilitated discussion between members of startup teams, data scientists, and legal experts.

But the bigger picture is to accelerate a positive future with blockchain: products and services that operate free from reliance on intermediaries with potential choke points; “trustless” ecosystems of collaborators that have no need to enter into long individual discussions to assess the extent to which each other can be trusted; greater public understanding of the true use cases of blockchain; and the delivery of real value, sustainably and reliably, to end users around the world.

Speakers and panellists at the inaugural meetup on 26th July include:

The event will be taking place in classroom 342, which can be accessed by a staircase near the entrance to Imperial College at 180 Queen’s Gate. The postcode is SW7 2RH.

The doors will open for networking at 6.15pm, ahead of the talks starting at 6.45pm.

For more details of the event and the speakers, see this meetup page. There’s no charge to attend, but attendees need to register in advance. After the formal part of the event has finished, informal discussions will be taking place in a nearby pub.

All futurists face the question: what do we think about blockchain? This meetup is a chance for us, not only to work out our own answers to that question, but to contribute to building a positive future with blockchain.