1.) The future of anti-aging activism?

It is aging. Aging wipes out all the beauty in the world.

These impassioned words are spoken by Maria Konovalenko near the start of the video that launches the Indiegogo crowdfunding campaign for “Longevity Cookbook”:

There’s a lot of energy behind this campaign. If you are looking for a way to make a difference to the chance of significant progress towards the ending of aging, I recommend that you take a look at the Longevity Cookbook crowdfunding campaign. There are options to contribute financially to support the project, priced from $5 up to $5,000.

If you want to dig deeper into the advances in biotechnology that could enable new cures for age-related diseases – including the diseases from which most of our family and friends are likely to die in due course – you should look into the Rejuvenation Biotechnology Conference that is taking place in San Francisco 19-21 August. There’s a great line-up of speakers (see the picture below) including: 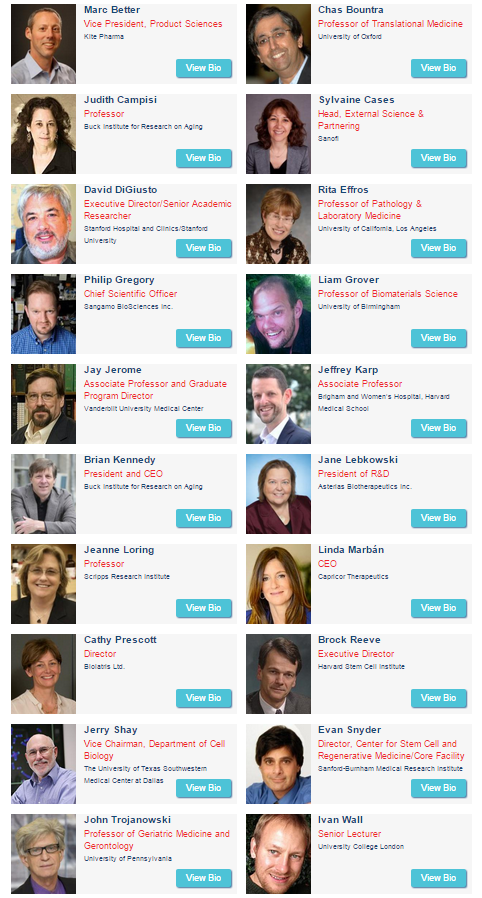 Super early bird registration is available up until June 15th, at which time the prices rise. See http://www.sens.org/outreach/rejuvenation-biotechnology-conference-2015 for more details.

Many London Futurists will know about the IEET – the Institute for Ethics and Emerging Technologies. To quote from http://www.ieet.org/index.php/IEET/about,

The Institute for Ethics and Emerging Technologies was formed to study and debate vital questions such as:

The IEET was founded in 2004 by philosopher Nick Bostrom and bioethicist James J. Hughes. By promoting and publicizing the work of international thinkers who examine the social implications of scientific and technological progress, we seek to contribute to the understanding of the impact of emerging technologies on individuals and societies, locally and globally. We also aim to shape public policies that distribute the benefits and reduce the risks of technological advancement.

The IEET and London Futurists have goals that are closely aligned. Two differences are that London Futurists puts more priority on organising real-life speaker meetups, whereas the IEET maintains an excellent throughput of research articles on its website.

The IEET is currently in the middle of a minor reorganisation, and is seeking some additional funding to cover some costs of their projects (including the management of their website). If you’d like to find out more details – and potentially to contribute financially – see https://donatenow.networkforgood.org/ieet.

An interesting new meetup has recently been created in London, “Programming Democracy”. The founder of that group, Reginald Adams, has released a document in which he sets out his ideas. Here’s an extract:

We have seen a variety of problems with the political system we have. Most noticeably recently there has been an issue with proportional representation for example but I think it goes much deeper than that. I think that the system we have, that we are told is democracy, is compromised by the influence of big business and the most wealthy. It could be said that it had this aspect within its design from the very beginning and it still remains. Big business has lobby groups, biased think tanks, they funds parties, directly employs MPs and their employees are often seconded in to write up legislation directly or sit on commissions. Of course this is going to sway what Parliament is meant to do in the public interest with what is good for big business.

Any notion of Direct Democracy (DD) is met with the argument that DD will turn into ‘Mob Rule’, so if we are to design such a system a lot of the focus has to be on getting the best out of the collective and for this I am suggesting a committee of specialists type structure who work in a transparent, open to public suggestion, steered by public consensus, and who inform/educate the public as they go on the detail of the issues being discussed so that the public can make the ultimate decision to allow or reject Acts of Parliament that they, the mixed committees, draw up after long debate and consultation. This may not seem absolutely perfect but I think it just has to be an enormous improvement on what we have. It would need a construct that itself does not become corrupted, corruptible or compromised in any way and I have some ideas for that too…

To get involved in that discussion, see http://www.meetup.com/Programming-Democracy-London/boards/view/viewthread?thread=48957255.

5.) Volunteers help needed for check-in at this Saturday’s #LonFut meetup

I’m looking forward to hearing Stefano Vaj talk this Saturday on the subject “The future of biopolitics”.

For more details about this event, and to RSVP to attend, see here.

On this occasion, I’m asking for a couple of volunteers to help greet and check-in attendees when they arrive for the event, from around 1.40pm onwards. In return for assisting, your own entrance fee for three forthcoming London Futurists events will be waived.

This task is best suited to people who have already attended previous London Futurists events, who therefore know the usual setup. Please get in touch if you think you might be interested.

6.) Chapters in the forthcoming book “Democracy 2.0”

The Transpolitica editorial and review team have already received a number of good chapters for inclusion in the forthcoming book “Democracy 2.0” (placeholder cover concept below). All being well, the book is scheduled for e-publication on 21st June. If anyone is thinking of submitting a chapter (word count up to 5,000 words, but could be as short as 1,000), the Transpolitica team will need to receive copy that is essentially finished by the end of this month.

As stated on the Transpolitica webpage for the project,

Preference will be given to chapters which will be perceived as newsworthy – they will be of real interest to journalists and bloggers, who will want to write about their content. These chapters should, therefore, be novel and provocative, without sacrificing rationality or objectivity.

The organisation formerly known as Cambridge Wireless – now presenting itself more simply as “CW” – organises an annual two-day conference on the future of wireless. I’ve had the pleasure to speak at two of these in the past.

CW have invited me back again this year, as one of the opening keynote speakers. The abstract for my talk is as follows:

Wireless has spent two decades disrupting numerous other industries. But the boot is now on the other foot. This talk anticipates the powerful forthcoming trends that threaten to steamroller the wireless industry, with the well-spring of innovation moving beyond its grasp. These trends include technologies, such as artificial intelligence, next generation robotics, implantable computing, and cyber-security; they also include dramatic social transformations. The talk ends by suggesting some steps to enable a judo-like response to these threats.

This year, the event is being held, not in Cambridge, but in London. It’s taking place 23 – 24 June at The Emirates, London. For more details, see http://www.cambridgewireless.co.uk/futureofwireless/default.aspx. Note in particular the following:

If you are part of the next generation of technologists under 35, here’s your chance to win a free ticket to this year’s Conference – tell us what tech innovation you are interested in and why it’s disruptive. Send your entry, along with your job title, organisation and DOB to olivia.hughes@cambridgewireless.co.uk by 5th June.

In case you’ve missed any of the announcements about the other forthcoming London Futurists events, here’s a quick summary:

In each case, click on the links for more information, and to RSVP to attend.

This entry was posted in Newsletter and tagged London Futurists, newsletter. Bookmark the permalink.